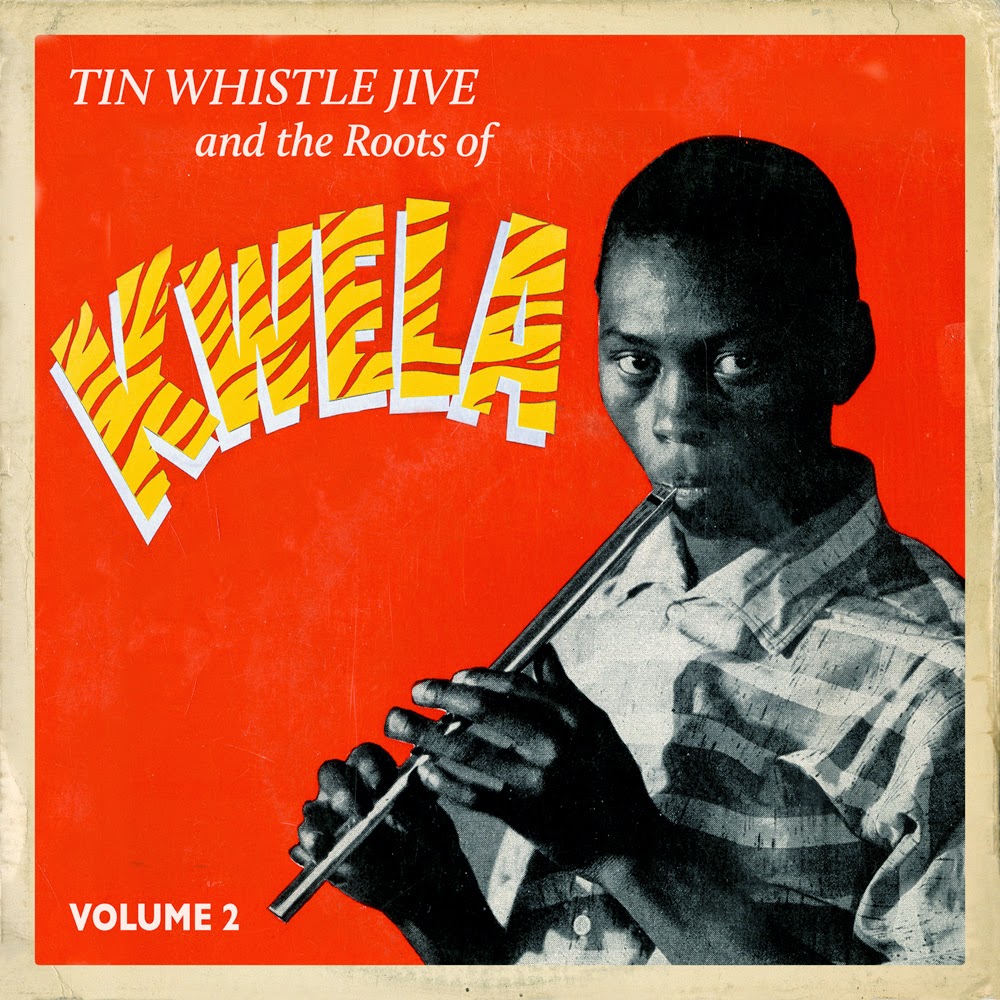 Tin whistle jive, also referred to as penny whistle jive—the music which subsequently became known as kwela around 1958—was one of the first indigenous popular musics from South Africa to enjoy commercial success and international notoriety. With its roots in the marabi tradition, the music at times blended elements of rock ’n roll, blues, jazz and swing into a language of irresistibly catchy tunes ideal for dancing, and as a result generated significant cross-racial appeal.

The appreciation of kwela by both black and white audiences is highlighted in this October 9th, 1958 image below from Jet magazine, an African-American weekly periodical published out of Chicago. Here a white “house-wife”, Jeanne Hart, dances the “kwela" with a transplant from Sophiatown, Cameron Mokaleng, in a London club. I suspect they may have been dancing to Tom Hark, Elias Lerole’s smash hit which topped the British Hit Parade around June 1958 and set the bar for kwela’s international rise. 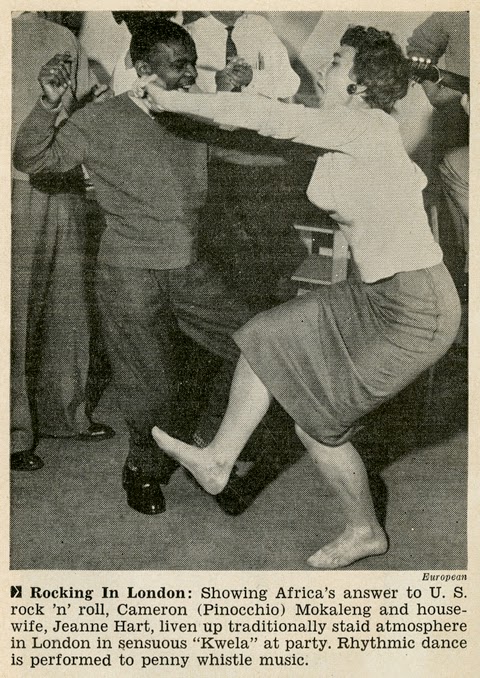 In November 1958, a month later, the same image could be found 15 000 km away accompanying an article in the Singapore Free Press describing the new London scene with the headline “Now they’re all doing the kwela”. And a subsequent article in the Singapore Times compared the rise of kwela with that of rock ’n roll and pondered whether this new style would supplant rock in popularity. (“Kwela and Rock ’n Roll”, Singapore Times, January 10th 1959) Indeed for a brief period record executives seriously considered investing in the new craze as the next ‘big thing’ to follow the rock phenomenon.

By the end of the 1950s kwela LPs, EPs, 45s and 78s could be found in countries across the globe including the UK, USA, Argentina, Spain, France, Germany, Rhodesia and of course South Africa. It is from these varied sources (including many original South African 78 rpm recordings) in the Flat International archive that this chronological discography has been compiled.

I approached this project in a similar way to the Makeba Track Less Travelled compilation featured at Electric Jive by first digitizing all the kwela and flute music in the Flat International archive. The total tallied up to a generous 516 tracks. Of course, many titles were issued multiple times on different formats and this process allowed me to select the best quality versions where possible. Using Apple’s Smart Folder system I was able to access all the tracks chronologically in a virtual single folder without having to duplicate massive amounts of data. Seeing the tracks as a list also generated possible scenarios for how aspects of the style developed. Screen grabs of this track list, or more specifically—Kwela Discography—can be viewed below. I then combed through the list and selected the best material along with historically significant tracks to produce perhaps the first extensive survey of this music form. The first two compilations of Tin Whistle Jive and the Roots of Kwela, Volume One (1951-1956) and Volume Two (1956-1957) can be heard at Electric Jive. Over the next few months we will continue to post additional volumes covering a significant gamut of the style up until its eventual demise around 1962. 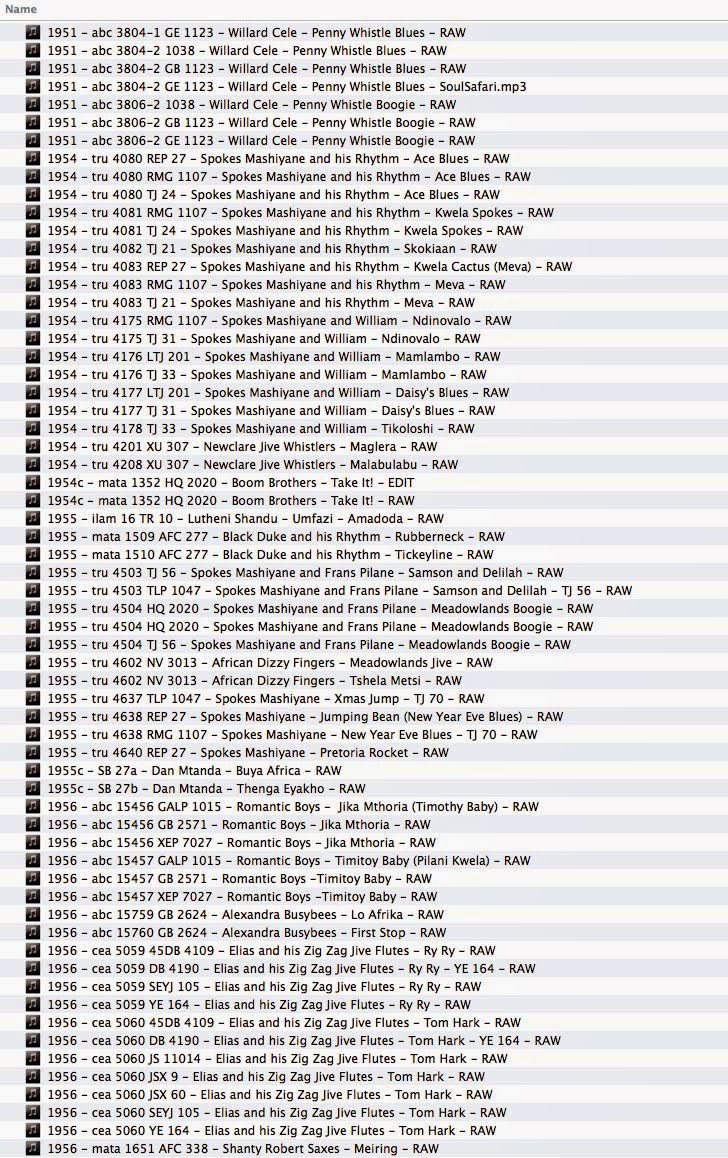 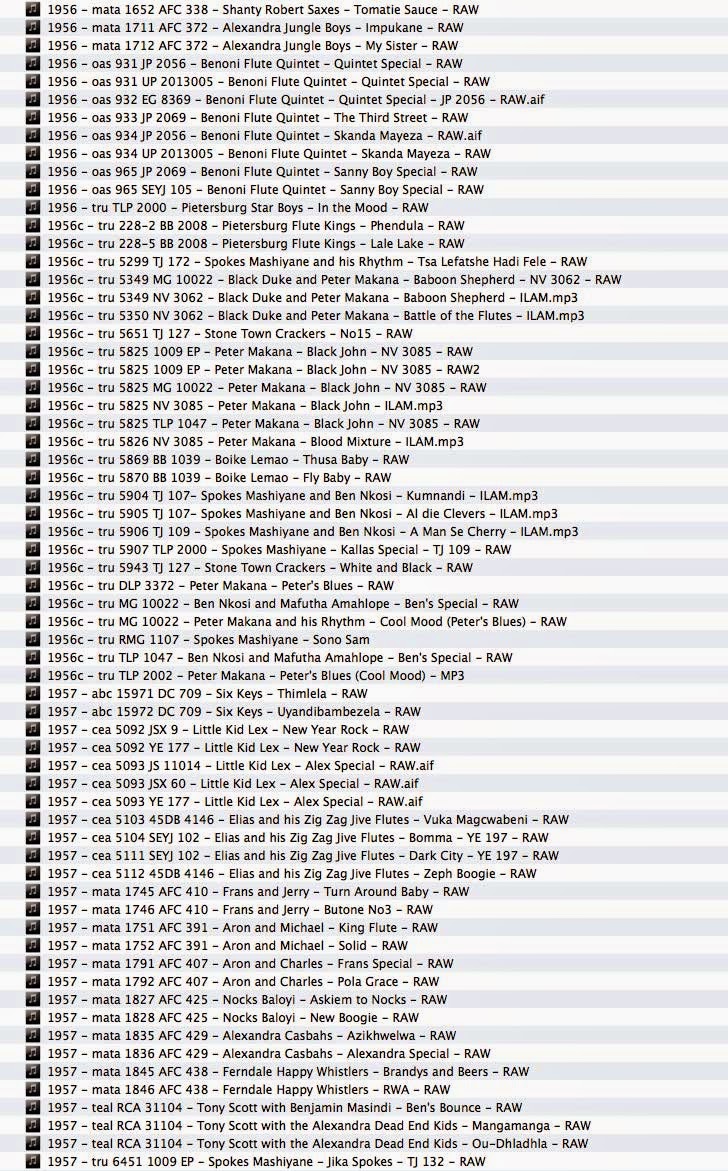 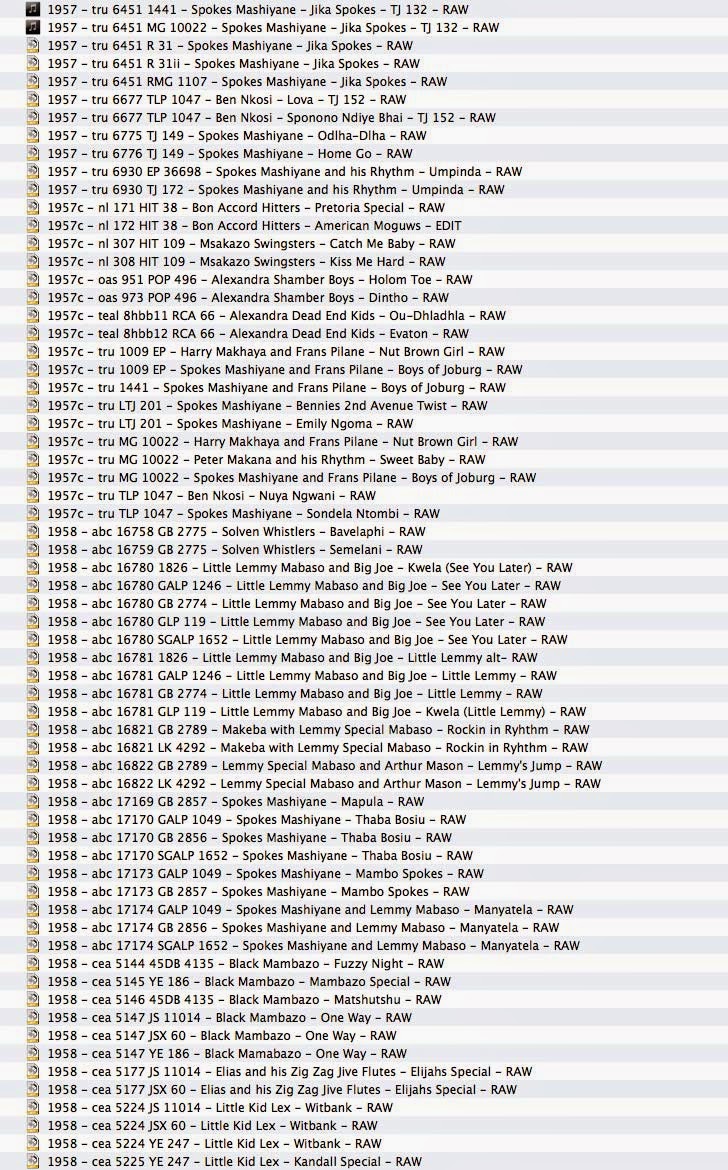 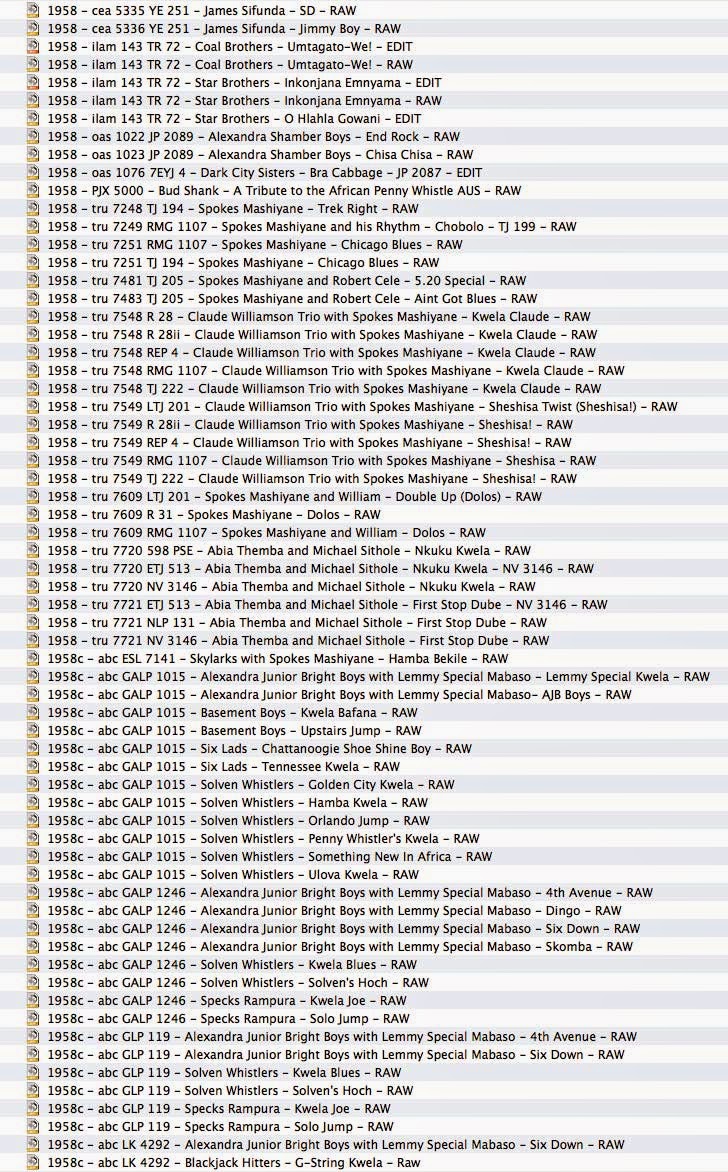 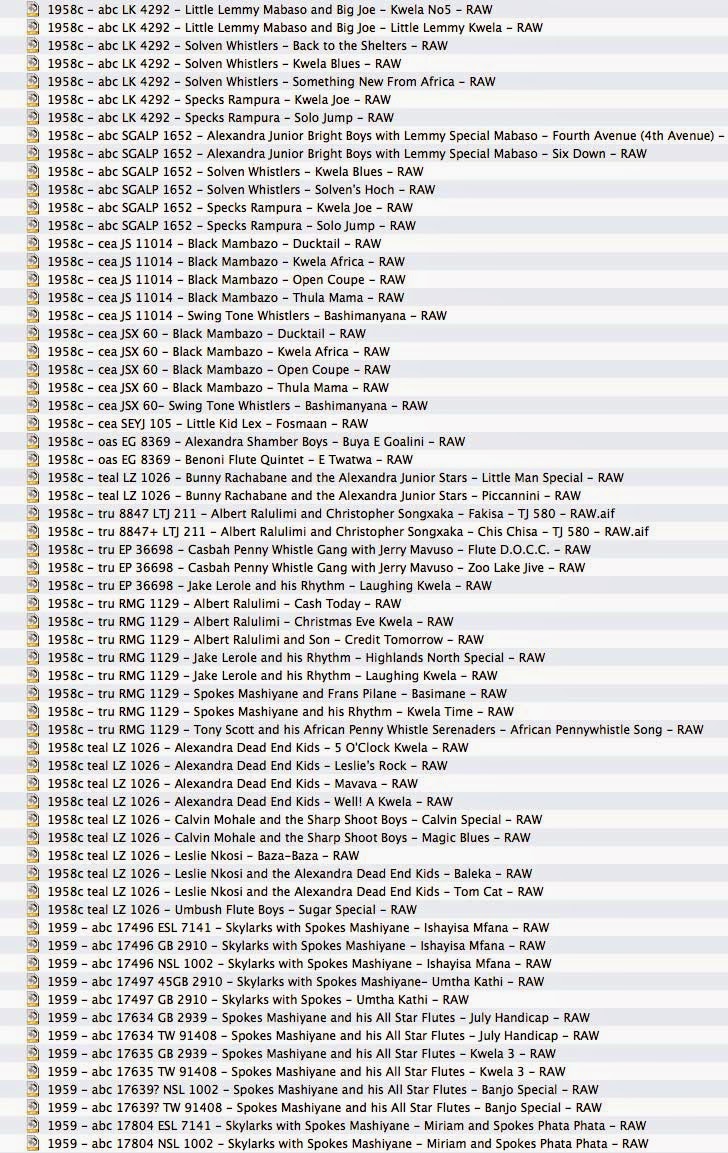 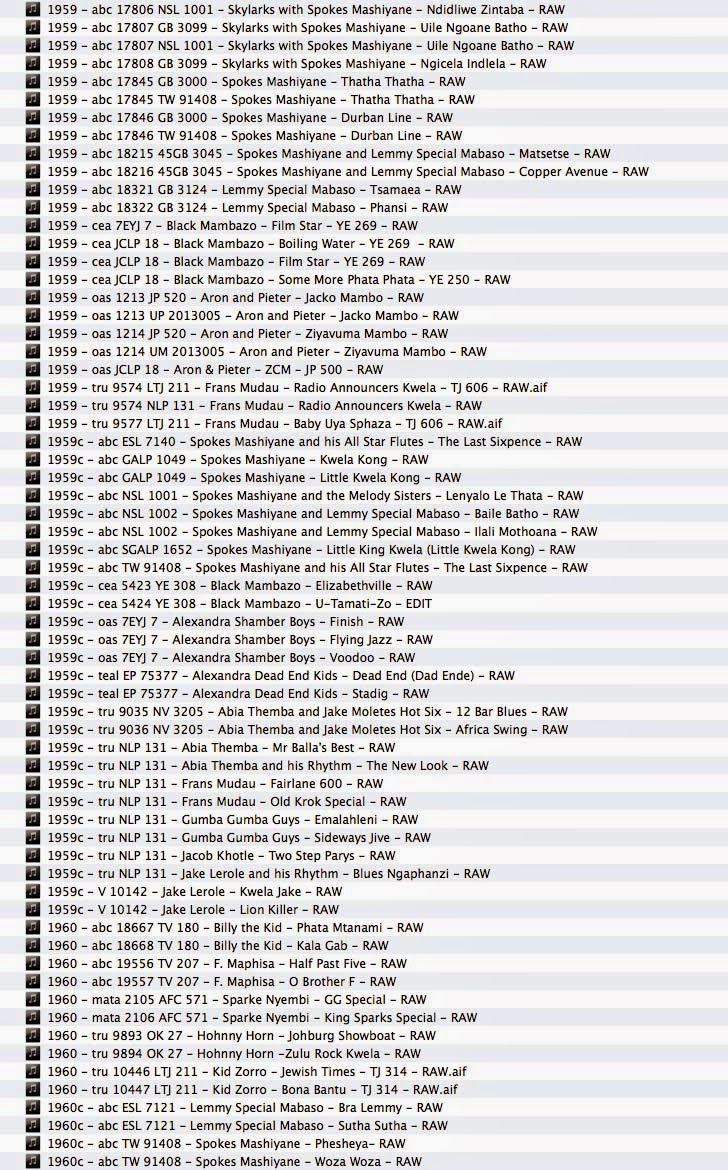 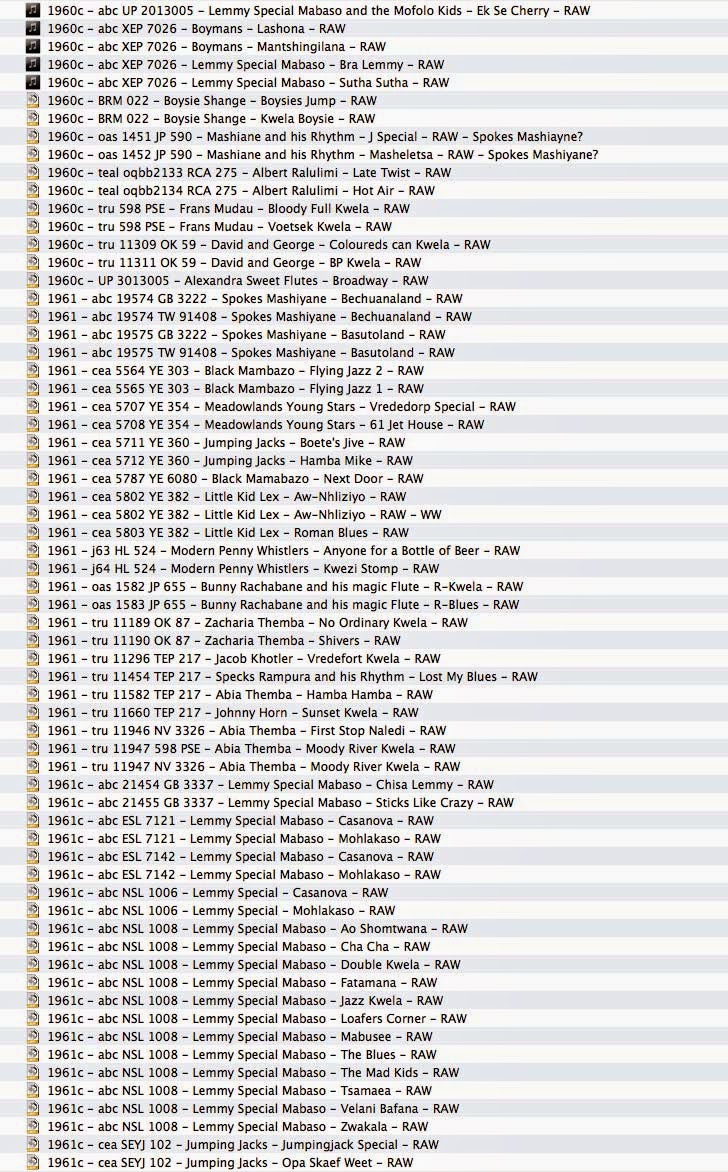 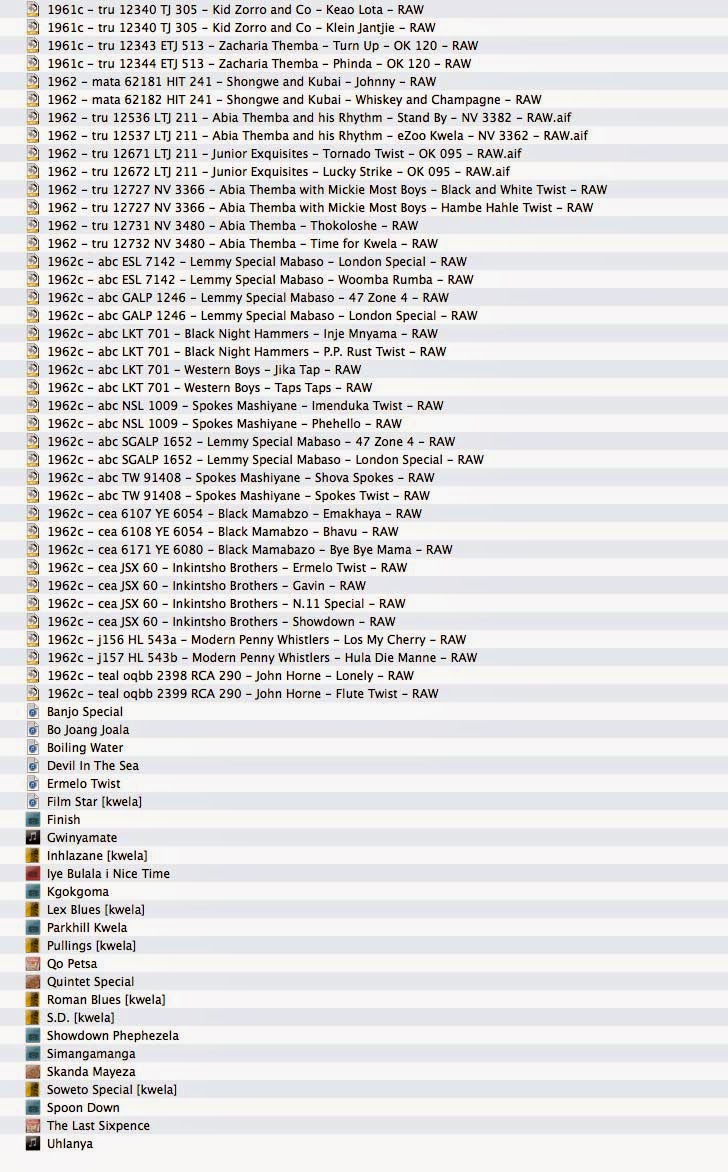 The liner notes of many kwela LPs and EPs marketed in the UK and South Africa in the late 1950s describe the roots of the music in this way: “The Pennywhistle of today originates way back when African herd-boys fashioned a pipe from bamboo. They called this pipe a 'Mahlaka' and it gave them enjoyment in their lonely vigil whilst herding their fathers’ cattle.” (Columbia, SEYJ 105) “As time went on these were replaced by tin whistles as the bamboo was not strong enough and did not last. These tin pipes have been greatly improved and are what we now call ‘penny whistles’. The penny-whistle became the popular instrument of little African boys and they could be heard playing on street corners where they attracted much interest and attention.” (Columbia, SEYJ 102)

In the 1930s and 40s, as herd-boys migrated to cities looking for work, the affordable German-made tin whistle became a reliable substitute for the indigenous reed counterpart. (Allingham, Rough Guide to World Music, p. 641) The versatile whistle could be stored in one’s belt, produced at a moments notice, or played while walking. “[M]usicians who could not afford band instruments imitated big band music on penny whistle [and] several of South Africa’s jazz saxophonists started their musical careers on this instrument.” (Lara Allen, Circuits of Recognition and Desire in the Evolution of Black South African Popular Music: The Career of the Penny Whistle; p. 39). Frederick Maphisa recalls buying his first tin whistle in 1936 for 2s 6d. Often he would walk to central Johannesburg from Western Native Township and busk outside cinemas where lines would queue. (Allen, ibid, p. 35)


By the 1950s groups of pre-teens and teenagers could be seen playing in townships like Alexandra or attracting huge crowds on the street corners of Johannesburg. Sometimes a make-shift band was put together with any number of whistlers and a guitarist for rhythm; as can be seen in the extraordinary footage in Lionel Rogosin’s 1959 quasi-documentary Come Back Africa. Often these performers would play a “cat-and-mouse” game with police avoiding arrest for public disturbance (Allingham, p.641). But clearly as the film reveals, the police like the rest of the racial-mixed crowd look on with awe at the street performances. Perhaps the presence of Rogosin’s camera tempered their typical reaction.


As Rob Allingham points out this music eventually “attracted a white following, particularly from rebellious suburban teenagers referred to as ‘ducktails’”. (Allingham, World Music, p. 641) Rogosin’s film shows a number of these ducktails viewing the penny whistle performers in various street scenes. Notably, it was the ducktails who would subsequently play a role in popularizing the music for white South African audiences.


Of course the penny whistle’s history in South Africa is more complex and can also be traced back to the influence of British military marching bands from as early as the 1910s. Some of the instruments and very often the clothing of these marching bands was adopted and adapted by black musicians as Lara Allen reveals:

"In the late 1930s and early 1940s the marching style and parade costumes of Scots regiments had a marked influence on developing black urban popular culture. […] Scottish fife-and-drum and pipe-bands were more precisely imitated by groups of black males known as scottishes, playing penny whistles and drums. […] Willard Cele, Jake Lerole, and Ntemi Piliso, who became well known musicians later on, were all at various times members of the Alexandra-based Scottish band originally known as the Alexandra Scots and later as the Alexandra Highlanders. The membership of Scottish bands varied, but usually included fifteen to twenty-five penny whistlers and two to five drummers. Members ranged in age from adolescents to men in their early thirties. The most striking aspect of these bands was their uniform that, as far as cost would allow, simulated exactly the regalia of Scots Pipers: white spats, glengarries and tartan kilts with sporrans." (Allen, ibid, p. 33)

Very little, if any, of the music in this form was recorded; though there are hints at it, for example, in the 1957 tracks King Flute and Solid by the Aron (Jake Lerole) and Michael on the Troubadour label where the rhythm section almost alludes to a military-styled drumming.

Interest in the scottishes declined after the second world war. Many performers shifted to other instruments; for example Ntemi Piliso who was already playing saxophone in big jazz bands like the Harlem Swingsters. (Allen, ibid, p.36) Similarly artists such as Albert Ralulimi and Barney Rachabane all cut their teeth on the penny whistle before moving onto other instruments. 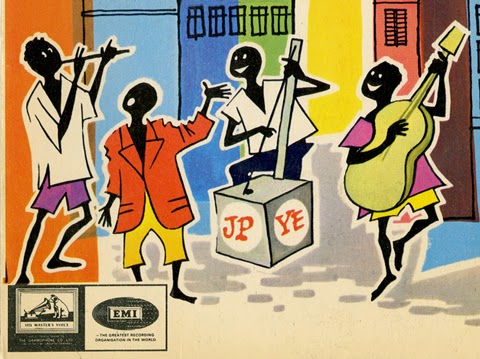 Many young aspiring musicians tried to emulate the sound of majuba or African jazz with this more affordable instrument. Jake Lerole recalls playing an early form of kwela in shebeens from 1948 with a dance band comprised of penny whistle, guitar, concertina and home-made percussion instruments. (Allen, ibid, p. 38) As the form developed, groups featured a lead flute accompanied by four or five rhythm flutes. While artists like Spokes Mashiyane would perform solo accompanied by guitar, eventually a variety of instruments including home-made ones became the standard. Some groups included a bassist operating a babatoni or refashioned tea-box as an upright bass. The tea chest bass was also common to many skiffle bands in the UK during this time, including Lennon and McCartney’s Quarrymen. As this 1958 Daily Mail headline suggests—“Kwela Scatters the Skifflers”—much of the popularity of kwela in the UK stemmed from its grassroots approach and similarity to the skiffle. (Columbia, JS 11014)

The first recordings of the music that would eventually become known as kwela were in the form of a twelve bar blues made by Willard Cele in 1951 and featured in Donald Swanson’s classic film, The Magic Garden, but it was only between 1954 and 1956 that the commercial appeal of this music began to be recognised in South Africa, notably with the rise of Spokes Mashiyane. Prior to 1958 the music was generally categorized on record labels as flagelot jive, tin whistle jive, penny whistle jive, flute jive and so on. 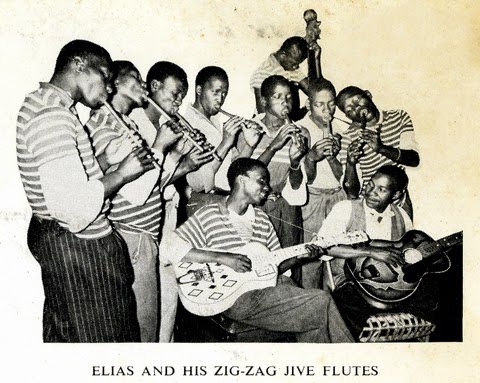 A British scout, looking for a catchy theme to accompany a new British television series about illicit diamond smuggling in South Africa, selected the 1956 tune Tom Hark by Elias (Lerole) and his Zig Zag Jive Flutes. The Killing Stones, was released on March 23, 1958 and its theme song prompted an interest by viewers leading to a UK record issue on 78 rpm (Columbia, DB 4109) and 45 rpm (45-DB 4109). By mid 1958, Tom Hark had sky-rocketed to the top of the British Hit Parade.

The term kwela can loosely be translated as “step up” or “climb up” in a number of South African languages, but it was also a slang term that referred to apartheid-era police vehicles. When people were arrested policemen would order them to “step up” into the vehicle and the name stuck. In the introduction to Tom Hark, one can hear a re-enacted conversation of a street-gang playing an illegal game of dice. One of the individuals shouts out in tsotsitaal (an Afrikaans derived street-slang) “Hier kom die kwela-kwela! Stop […] want hulle gaan ons bo vat!” (Here comes the kwela-kwela! Stop […] otherwise they’re going to take us away.)

Lara Allen in her detailed analysis speculates that it may have been British DJs who, in hearing this introduction, interpreted it as an announcement of the impending music and inadvertently applied the name to the style of music. 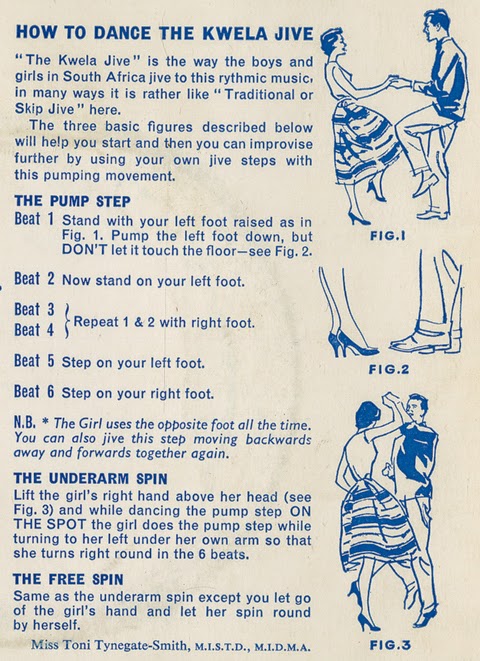 The word kwela, sometimes spelled quela, was also the name of a popular dance of the 1950s and can be found in the titles of tracks recorded many years prior to Tom Hark. But here the term is used in its literal sense as in: Kwela Spokes translates as “Climb-up Spokes” or “Get into it, Spokes”… rather than “Spokes is recording a kwela”.

The international success of Elias Lerole’s Tom Hark in 1958 further sparked a craze and a whole generation of penny whistle imitators in South Africa but by then the instrument’s eventual demise had already been written by its own stars who had replaced it with the saxophone. Complex arrangements with additional sophisticated instrumentation continued well into the early 1960s but by 1962 recordings of the style more or less faded away.