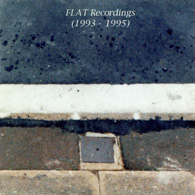 The FLAT Gallery, housed in an apartment on Mansfield Road (now Steve Biko Road) in Durban, South Africa was founded in October of 1993 by the apartment occupants: Ledelle Moe, Niel Jonker, Thomas Barry and Siemon Allen. Born out of a growing dissatisfaction with the limitations of the existing art scene in Durban and the need to take a more proactive approach in creating exhibition opportunities, the FLAT became a site for exhibitions, performances, multi-media events as well as a place for a broad range of creative exchanges. Running parallel to the political developments in South Africa that led to the historical elections of April 1994, the FLAT Gallery boasted 32 exhibitions/events over a period of 16 months, bringing a vital alternative voice to the cultural climate of Durban. Young artists, students, recent graduates, as well as established artists and those working outside of institutions were all given the opportunity to participate and all came to explore their work in ways that might not otherwise have been possible in the limited or more restricted conditions that existed in the region’s few established venues.

The FLAT’s mission to promote a vibrant interaction amoungst creative individuals began as a project to mount exhibitions without censure and to maintain a free space without the traditional selection system. This policy of unrestricted content and open format, however, also fostered a climate for experimentation and so an environment was created that proved to be fertile with potential for collaboration and interaction. It was a phenomenon that appeared and then evolved out of the creative needs of the artists who founded the project and those who later participated. The FLAT became a site for a kind of creative activity that had been unknown or at least unexplored in Durban at that time.

In addition to being a place for highly experimental programmes, the FLAT was an alternative space that operated 24 hours a day, 7 days a week. Though the ‘lounge’ served as the main gallery, the apartment occupants often gave up their living spaces for special events. The exhibition space doubled as a studio-work site. Openings often led to conversations between artists and viewers that extended well into the night. Without set hours of operation, the FLAT was an informal art space where spontaneity ruled and the lines between the artists’ ‘lives’ and the project’s ‘programmes’ were blurred. What occurred at the FLAT was a breaking down of barriers between art and life - between artists and viewers. In stretching the definition of what exhibition or performance could be, the artists involved with the FLAT gallery discovered that observation and participation could become synonymous.

From the mundane to the profound, many of the interactions at the FLAT Gallery were recorded onto cassette tapes. These documents were subsequently used to produce additional audio experiments and formed the basis for a number of audio installations and performances at the FLAT and beyond. Within the 16 month period, over 40 casettes were produced.

These two compact disks document in part some of the audio experiments, performances and artworks that took place at the gallery. Please note that the equipment and techniques used at the FLAT were exceptionally low-fi, hence the 'quality' of the recording.

The double CD boxset was issued in 1999 at the same time as the publication of the book: The FLAT Gallery (1993 - 1995), a comprehensive 320 page history of the gallery. PDF copies of the book can be viewed here. MP3's from the CD can be downloaded here.